The Martial Arts for Teens program at Premier Martial Arts and Fitness Academy, designed for 13-17 year olds, offers a variety of disciplines for teenagers to explore. From our Freestyle classes to our Brazilian Jiu Jitsu program, through to the competition team and our group fitness.

Premier Martial Arts and Fitness Academy offers a diverse range of programs on martial arts  for teens, including:

The Academy’s Leadership program gives students the opportunity to develop the skills and abilities need to become a martial arts instructor.

Our Freestyle Martial Arts For Teens  will provide a high energy and exciting environment where your teen will:

If you would like your teen to experience the dynamic Freestyle Martial Arts for teens program, and as well as everything else Premier Martial and Fitness Academy can offer, then click the button below to find out about our no obligation, special trial program.

Our Martial Arts For Teens & Fitness classes are designed to get you in the best shape of your life! This is done through intense classes, conducted by fully qualified instructors who always focus on the correct technique in order to help you improve your:

Our Fitness classes are also perfect for stress management and relaxation! Premier Academy’s motto is “Fitness with Meaning”! You don’t have to be in shape or fit, there is no prior experience necessary! If you would like to experience the excitement and challenge of our Pilates classes, we invite you to book a trial session. 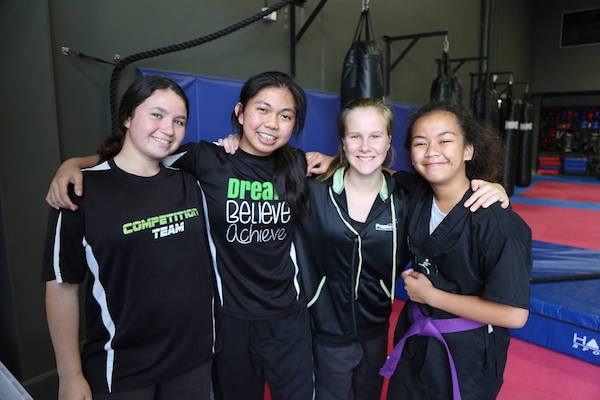 Brazilian Jiu-Jitsu (BJJ) is a grappling-based martial art whose central theme is the skill of controlling a resisting opponent in ways that force that opponent to submit. Due to the fact that control is generally easier on the ground than in a standing position, much of the technique of BJJ is centered round the skill of taking an opponent down to the ground and wrestling for dominant control positions from where the opponent can be rendered harmless. BJJ techniques feature heavily in Premier’s Freestyle Martial Arts curriculum, but for students that want to expand on their knowledge of the “ground game” we offer a separate Brazilian Jiu-Jitsu program. This program is taught by expert instructors, and students who train regularly will also be eligible to grade in this martial art.

What our customers say on
Facebook and Google Reviews

Belinda Johnson

Read More
Couldn't be more happier with the friendly stuff and the warming environment my three children attend and love every minute of class I definitely recommend premier to all after seeing the difference in my kids and will be going for as long as possible I can see black belts in my kids.

Dan Mabbs

Read More
A big thankyou to all of the team at Premier Martial Arts and Fitness !! My 5 year old son has gained so much from his training. Every instructor has shown amazing patience and eagerness to pass on their knowledge, while teaching discipline, determination, goal setting and courage at every step. Awesome !!!

Jenna Hunt

Read More
Choosing to enrol my boy at Premier Martial Arts , has been one of the best decisions i have ever made. The past few months my son has developed and changed in so many positive ways, he has a passion and drive for martial arts and cant wait until school finishes every day so he can attend his classes ! I highly reccomend trialing their classes you wont be disappointed !

Paul Delaney

Read More
My 4 yr old son Noah started the little champions 3 month ago and has loved every moment. There's a great Family atmosphere so much so I joined tbe club myself...and it's another way Noah and I can bond over a love for the sport. Keep up the great work guys the kids and parents really appreciate you're hard work.

Tracey Stevenson

Read More
Premier Martial arts is a great place for my kids and the staff are really good at their job and teach the children well. The skills you teach our kids is great and they enjoy coming.

Clare Carter

Read More
We have been coming to Premier for 3 years now. Both my son and daughter.. They have grown immensely in this time with confidence and discipline. This is what I love about it, learning life-skills, leadership qualities and how to listen.. I think Premier helps a child get ready for adult life.. The team are very friendly and have been consistently there through this time so we feel part of the Premier family
Previous
Next

Our Mini Little Champions, has been designed to introduce toddlers to martial arts classes in Perth from 18 months to 3 years old.

Our Little Champions program is specifically tailored to 3-6 year olds. This program focuses on developing basic martial arts skills and having fun doing so!

This program has been designed specifically to help your child (7-12 year) prepare to face the different challenges faced with moving from primary school to high school.

This program at Premier Martial Arts Academy, designed for 13-17 year olds, offers a variety of disciplines for teenagers to explore.