How Early Can You Start Taekwondo? 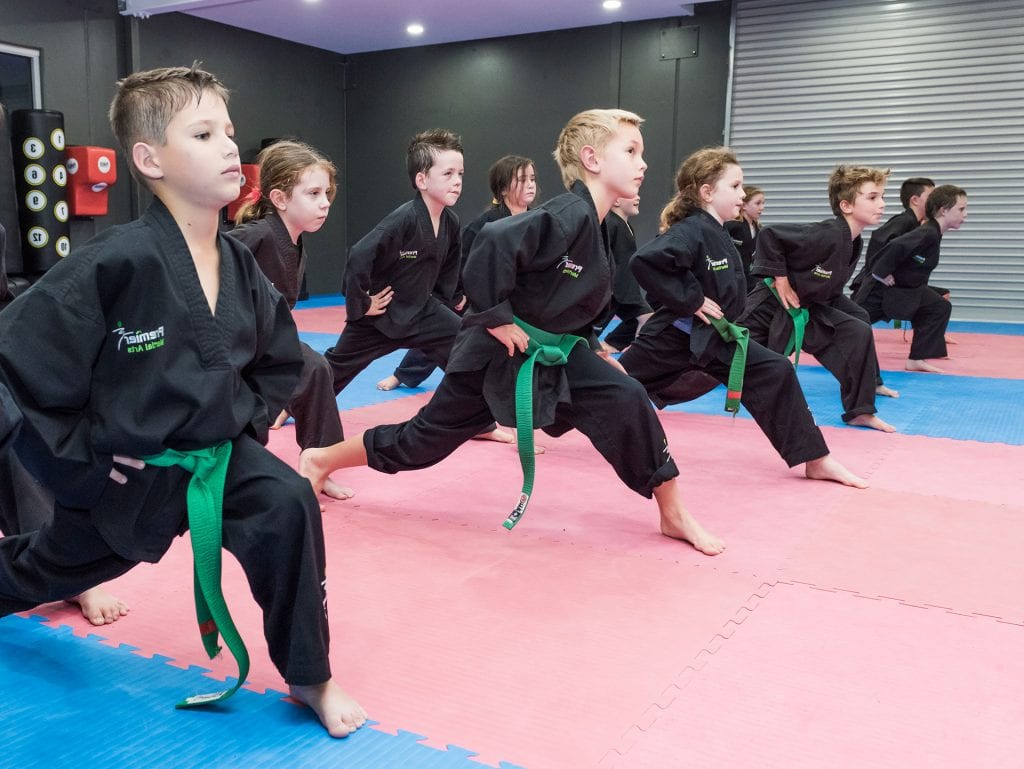 At Premier Martial Arts and Fitness Academy your child can start training in the martial arts, including Taekwondo, from the age of 18 months onwards. Our Academy provides a range of martial arts programs to suit kids of all ages:

Premier Academy’s programs are structured to suit the age and ability of their students, with classes differentiated by age and ability, so that kids of all ages can learn martial arts in an environment where they are encouraged to constantly improve in order to be the best they can be.

The Korean word Taekwondo comes from the words Tae, or “foot” or “to step on;” Kwon, which means “fist” or “fight;” and Do refers to a “way,” “art” or “discipline.” The combination of these words embodies the essence of the sport. Essentially, the word Taekwondo means “the way of using all parts of the body to stop fights and help to build a better and more peaceful world.”

Perth’s Premier Academy teaches modern Taekwondo as prescribed by the Kukkiwon and World Taekwondo Federation (the official governing bodies for Taekwondo). Taekwondo is one of the most systematic and scientific traditional martial arts, originating in Korea. It has become a global sport with a huge international following, and an official Olympic sport. Our Principal Instructor, Zlatan Jovanov, is a 7th Dan Kukkiwon Black Belt, and is authorised to grade students up to and including 6th Dan. Premier Academy also has three Head Instructors, all ranked 4th or 5th Dan Black Belt, plus a large team of Black Belt instructors ranked between 1st and 4th Dan Black Belt. All of our instructors are Kukkiwon-certified, and all of our students are eligible to have their rank recognised by the Kukkiwon. This Kukkiwon certification means that all belts issued are valid and recognised world-wide and our students are able to compete in all sanctioned events.

Can you start taekwondo at 13?

The perfect age to start your martial arts training is RIGHT NOW! Premier Martial Arts and Fitness Academy offers classes especially designed for the needs of teens between the ages of 13 and 17 seven days a week at its purpose-built, fulltime martial arts centre in Clarkson, located in Perth’s northern suburbs. Students at Premier Academy learn taekwondo kicking and footwork as it is embedded in our Freestyle Mixed Martial Arts system. Training in Taekwondo poomse is optional for students in our Teen and Adult programs. Premier Academy also has a very active Sports Taekwondo team, and our teen students compete successfully in both sparring and poomse at local, state and national levels.

Which is better for kids – Taekwondo or Karate?

There is no best martial art for kids, or for anyone for that matter. It all comes down to how you are taught and the training environment. What you really should be looking for is a school that offers a curriculum and classes suited to your or your child’s individual needs. At Premier Martial Arts and Fitness Academy we teach Freestyle, or Mixed Martial Arts, with a strong foundation based on Taekwondo kicking and footwork as we believe this offers one of the most modern, dynamic and effective fighting styles available. To help you understand why we base our Freestyle system on Taekwondo, we have listed the top five benefits of training in Taekwondo for kids:

Respect and honour are the foundation of all martial arts, but especially so in taekwondo classes. You learn to respect the martial arts, the Academy, your fellow students and your teacher. Students are expected to come neatly dressed in a clean uniform and adhere to the rules of the taekwondo training Academy. In your taekwondo classes, you bow to your teacher and also to your fellow students. Higher belt athletes are also shown respect as they have demonstrated the discipline and commitment to achieve their status. You learn to respect them and their commands. Students of taekwondo are also expected to translate this respect for cleanliness, discipline and people of authority outside of the Academy, whether that be at school, work, home or in the wider Perth community.

In addition to building respect for authority, taekwondo training at Perth’s Premier Academy teaches students to respect themselves. As students advance through the belts this achievement builds self-confidence. The discipline required in learning poomsae (patterns) as well as specific punching and kicking techniques builds confidence and mental focus. In children, often grades and behaviour improve as taekwondo training at Premier Martial Arts and Fitness Academy builds their confidence and enhances their attention.

At its core, training in taekwondo is about learning to diffuse situations. The practice is defensive, rather than offensive. What you learn though taekwondo training at Premier Academy can prevent you from becoming a victim in threatening situations. For Perth children, it is critical that they learn to be bully-proof and this is an important component of training in taekwondo at Premier Martial Arts and Fitness Academy. Being aware, but not afraid, of strangers is also a key area of taekwondo classes at the Academy. For adults, the confidence gained from knowing that you have mastered real world self-defence skills though your taekwondo training helps prevent you from becoming another crime statistic.

Training in taekwondo also involves unifying the mind with the body. The concentration required to learn to better control through punching and kicking leads to harmony within your body and mind. When your body works in harmony, you can translate this to the entirety of your life and how you operate in society. The focus required to perform complex moves and combinations, especially in a dynamic manner, gives you the ability to concentrate under pressure. The mental aspect of taekwondo training at Perth’s Premier Academy is undoubtably the most important benefit at student can gain through their martial arts training.

A typical taekwondo class at Perth’s Premier Academy involves dynamic punching and kicking drills, technique applications, poomsae (patterns), self-defence and core-strengthening exercises, plus stretches to improve your flexibility. You will find that your stamina and strength will improve dramatically through these active movements. For younger children, learning and practicing their poomsae — specific patterns of defence and attack movements — leads to better motor skills and body control, while also improving focus and concentration. These are not idle claims – they are backed by rigorous scientific studies such as the 2014 study published in Sports Medicine that noted taekwondo athletes demonstrate high peak anaerobic power, flexibility and high dynamic upper- and lower-body strength and good core endurance.

How do I get started?

Premier Martial Arts and Fitness Academy is open Monday to Sunday and runs over 150 taekwondo classes per week (view our timetable). Our taekwondo classes are divided into age groups as well as beginner, intermediate and advanced levels. We also offer specialised classes for competing in MMA, taekwondo or kickboxing, as well as Brazilian Jiu jitsu and women’s only classes. You don’t have to be in shape and there is no prior experience necessary.

If you would like to experience the excitement and challenge of training in taekwondo at Premier Martial Arts, we invite you to come in and visit our school to begin your FREE Introductory Taekwondo lesson. You will have the opportunity to speak with the instructors and meet our friendly, professional staff. Through this free introductory lesson, you will get a first-hand understanding of the excitement, energy, empowerment, and life changing benefits of training in taekwondo at our Perth Academy.