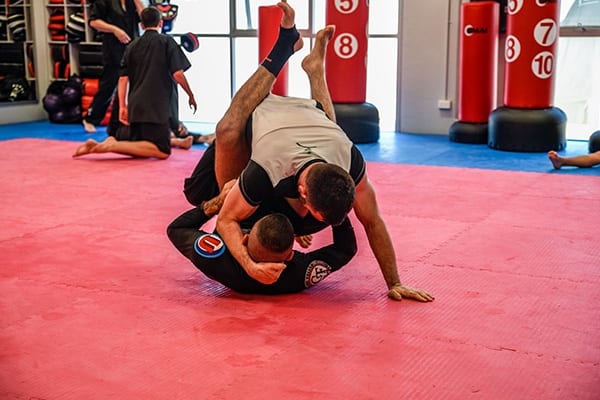 Brazilian Jiu-Jitsu (BJJ) was the first martial art to dominate the Ultimate Fighting Championship (UFC) and it remains an essential component of modern mixed martial arts, such the Freestyle Martial Arts taught at Perth’s Premier Academy.

A grappling-centric art, the goal of BJJ is to force your opponent into submission with joint locks and chokes. The emphasis is on technique and leverage and BJJ was designed to allow a smaller person defeat a stronger foe with ease. BJJ is often described as a game of “physical chess” due to its depth and technical nature. Premier Martial Arts and Fitness Academy, in Perth’s northern suburbs, also offers classes in Brazilian Jiu-Jitsu for those students who would like to further their understanding of grappling.

Brazilian Jiu-Jitsu classes at Perth’s Premier Martial Arts and Fitness Academy typically start with a warm-up designed to get you loose and ready to roll, as well as developing your skills. Hip-escapes, shoulder rolling, bridging, pummelling and other essential BJJ movements are drilled in nearly every class.

After the technical training, you will have an opportunity to “roll” – the BJJ term for sparring. In rolling you will grapple under BJJ rules for a submission. Rolling under the right conditions is exceptionally safe as there is no striking and you have the option to “tap out” or submit if you are ever in an a position you are not comfortable with.

WHY Brazilian Jiu Jitsu is good for you?

Brazilian Jiu Jitsu isn’t just a sport, it is a way of life. This martial art will not only give you some new skills but has the capability to transform your life for the better. Brazilian Jiu Jitsu, also known as BJJ or the “the gentle art”, can be for everyone, and these are some of the benefits you will experience after just a few months of training in BJJ at Perth’s Premier Academy:

GETTING FIT AND STRONG

One of the most immediate things people start to notice after they begin their BJJ journey is the improvement in their overall physical condition. People become stronger, leaner, and have better cardiovascular health after even just a short time training!

Training in a BJJ class is an awesome way to let go of the stresses of life and to feel calmer and more balanced. Even when you are walking into the gym feeling stressed, your worries are pretty quickly forgotten once you begin to grapple with others. BJJ allows you to let off some steam, and focusing on rolling is a good way to give yourself time away from overthinking everyday stresses.

BJJ  is a great way to surround yourself with people of all ages and backgrounds, in an environment that is all about promoting positive teamwork and learning. At BJJ you are surrounded by people with similar goals, levels of discipline and motivation. Nothing creates bonds like training together, because a great part of martial arts is looking out for your partner and trusting them in order to train safely together.

BJJ will give you the skills to learn how to manage conflict and in some circumstances control an aggressor without inflicting any serious harm to them. BJJ will teach you how to get someone to the ground, understand how to move on the ground and use someone else’s aggression or energy against them.

BJJ also provides an amazing opportunity for self-development and improvement. You will find that your problem solving skills are improved by training BJJ on a regular basis. Many students also notice that they can remain calm in tough or high pressure situations after practicing BJJ for a couple of months. Every day in training we face adversity, and when sparring we learn to remain calm to ensure we can think in order to get through tough times.

How do I Get Started?

If you would like to get a taste of the dynamic Brazilian Jiu Jitsu program and experience what Premier Martial and Fitness Academy can offer you, then click here  to find out about our no obligation, special trial program!